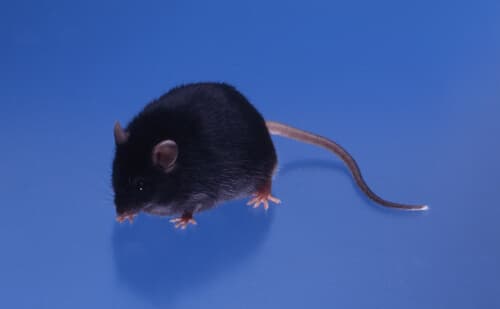 A mutant strain that develops marked diabetic symptoms spontaneously, including obesity, overeating, and hyperinsulinemia, was discovered at the Jackson Laboratory. These traits were found to be under the control of a single recessive gene located in the fourth chromosome; the gene was named “diabetes” and was expressed using the gene symbol Leprdb. In 1992, CLEA Japan, Inc. introduced a strain that was maintained at the First Department of Pathology, Kansai Medical University, using mice originating from the Jackson Laboratory; its production and supply was then begun.
[Number of generations as of August 2002] F?+33

Homozygotes (+Leprdb/+Leprdb) begin to exhibit obesity at 4 to 5 weeks after birth and have higher blood glucose levels as their body weight increases. The glucosuria-positive rate is almost 100% after 10 weeks of age. The amount of food consumed by a homozygote reaches 1.5 to 1.8-fold of that consumed by a heterozygote (m+/+ Leprdb). Both homozygotes and heterozygotes become proteinuria-positive at about 6 weeks after birth, with a positive rate of almost 100%. An increase in the plasma insulin level begins 10-14 days after birth, and the administration of insulin cannot control the blood glucose level in severe cases, where the increased activity of gluconeogenic enzyme is evident. Although pathologic changes in the kidney, lung, heart, or eye are unlikely to occur, degranulation and regressive changes are found in Langerhans’β cells. (This section was excerpted from Genetic Variants and Strain of the Laboratory Mouse, 2nd Edition, OXFORD.)