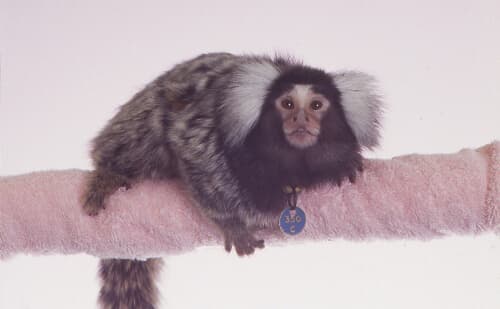 Common marmosets were introduced from ICI (UK) to the Central Institute for Experimental Animals, where their breeding was performed and efforts were made to extend their usefulness. Thereafter, Japan E.D.M. Co., Ltd., inherited the production technique and began the full-scale production and supply of these animals. Currently, the production of these animals is being continued by CLEA Japan, Inc.

Wild species of marmoset are classified as so-called New World monkeys and live in watershed areas of the Amazon waters in South America. Common marmosets belong to the Anthropoidea suborder of primates and have the same taxonomical classification as macaque monkeys, but are more closely related to humans. They have many similarities to humans and macaque monkeys with regard to their brain, nervous system, circulatory system, digestive system, endocrine system, immune system, behavior, etc.
Because their body size (weighing 200-400 g) is similar to that of rats, they are easy to handle and do not require large spaces for rearing.
Zoonotic viral infection has not reported in these animals, and their susceptibility to Shigella or tubercle bacilli is said to be low. Common marmosets reach sexual maturity about 12 months after birth and deliver litters of 2-4 at a time (some individuals may deliver twice per year). Their life duration is said to be 15-16 years, although their exact lifespan is not known. As for the nature, these animals have a rather nervous disposition and therefore require due consideration when rearing and handling.